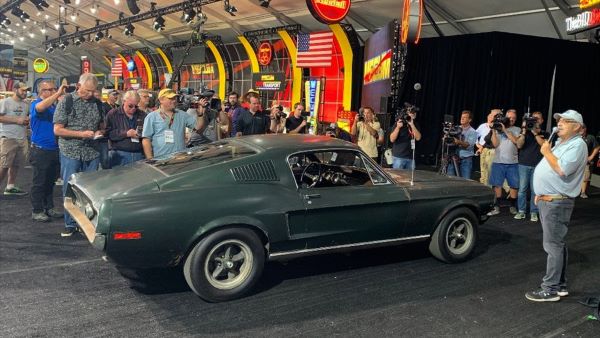 I often say how cool it is to be able to work with real enthusiasts who make up our fine family of Official Sponsors. At the top of the list is Mecum Auctions, our Official Title Sponsor. As you know, when it comes to American Muscle, nobody sells more than Mecum. That is a fact; Nobody!

For the past several years Dana, Frank and the Mecum team have presented the Mecum Experience display at MCACN. Surrounded by prime cars that will be offered at the huge Kissimmee Auction in January, we have seen some of the rarest and most desirable cars ever to cross the block in their display. Hemi E-Body convertibles, various Yenko's, incredible drag cars, prime Corvettes, Boss Mustangs and so much more. The display is always over the top and this year they are taking it to another level. Unless you have been living under a rock, you know that the original Highland Green '68 Mustang that was the actual Bullitt movie car, driven by Steve McQueen recently came out of hiding.

As recently announced, "after more than 40 years spent so well hidden that most believed it had been destroyed, the hero car from the Warner Bros. movie “Bullitt” reemerged in January 2018 at the North American International Auto Show in Detroit, and it’s now slated to cross the Mecum auction block at the world’s largest collector car auction this coming January in Kissimmee, Florida. Known simply as “Bullitt” after its namesake motion picture, the original Highland Green 1968 Mustang GT was driven by the “King of Cool” Steve McQueen at dangerously high speeds through the busy streets of San Francisco as the hero car in one of his most memorable motion pictures, and it is now on the fast-track to joining the ranks of the most valuable American-made collector cars ever sold at auction."

So now for more good news; The Bullitt Mustang will be making a special guest appearance in the Mecum Experience display at the Muscle Car and Corvette Nationals show, Saturday, November 23 and Sunday, November 24! If you didn't have enough incentive to join us, with well over 500 examples of the rarest and most sought after American Muscle Cars and the best of the best in Corvettes, now thanks to Dana Mecum, you have another!